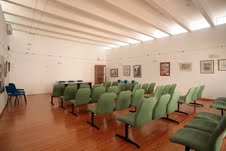 This year Nina and I are thrilled to announce that we have teamed up with Founders Forum to bring you the first ever Founders Forum Menorca TechTalk 2013, which will be held at our farm on the island. We invite outstanding entrepreneurs from around the world to enjoy a relaxed weekend together in a beautiful setting. The 2013 edition will run from Friday, June 28th to Sunday, June 30th.

On June 29th, our guests will give a series of short improvised debates on technology and innovation. As in previous years, we invite the public to attend the TechTalk Open Doors event and join us for an afternoon of dialogue and interaction with some of the greatest minds in the tech world. The event will take place on Saturday afternoon from 4:30-7:30pm. If you are interested in joining us, please contact us at menorcatechtalk@ff.co to secure a spot (capacity limited to 80).

We look forward to welcoming you to our farm to share an inspiring afternoon together!

Published by MartinVarsavsky.net in New Ideas with comments

After years of organizing the Menorca TechTalk I am interested in organizing the Co Working  Menorca TechHub. If you don’t know what co working spaces are read this article about them and you will get a good picture.  The idea is simple: to make deals with all the TechHub type work spaces around the world, places like General Assembly of NYC, or TechHub in London and its many counterparts in cities around Europe and the world, and to offer exchange programs so developers can work for weeks or months in an extremely relaxed/different environment that can allow them to focus on their work. It is the concept of work and vacation but applied to start ups where people are never really on vacation but can like the possibility of leaving say the London winter and spend 6 months working out of Menorca to see finish that beta version.

Menorca is a beautiful island, a perfect work environment off season for Northern Europeans and Americans, with direct flights to London and other European cities and connecting flights via Madrid, Palma, Barcelona and London to anywhere around the world. Start ups operating out of co working spaces around Europe can work in Menorca for a few months or as long as they need and have their seed money last longer.  Have a longer runway. Desks in Menorca TechHub will go initially for €150 euros a month, electricity and internet included, and accommodation can be found in Menorca for as little as €650 euros a month including health insurance which is free in Spain, room, board (food) and monthly mobile service.  So an engineer can live in a great environment, leading a simple life focused on work and recreation, riding her or his bike for less than €900 euros a month.  This is unimaginable in the North of Europe, especially if you give a price to hours of sunlight 🙂

After trying unsuccessfully with the government of the Island to promote this initiative I am now seeing if this project can take off as a private initiative, whether it be profit or not for profit.

So the first thing I need is 500m2 to get this project going. Possibly with expansion space available.  Possibly already furnished and ready to go from offices that some company has vacated. Could be anywhere in the island. Has to be reasonably priced.  I can also offer the owner of this space a revenue share. Please write to claire(at)fon.com with ideas. Let’s see if the private version of TechHub can get going!

Next June 22nd the fifth Menorca TechTalk starts. An event that my wife Nina and I organize every year in which we invite friends and entrepreneurs from around the world to our farm in Menorca. In previous editions we had founders of companies from Silicon Valley, New York, Spain, Germany, etc.

This year we will also have the privilege to listen to some of the most renowned tech entrepreneurs. As in previous editions, we invite anyone willing to join us to the TechTalk itself. A series of short improvised debates on technology and innovation that will take place on Saturday 23th from 4pm to 8pm. There is a 80 seat limit, so if you want to join us email us at menorcatechtalk@gmail.com

This is the video for the 2010 edition