England and Castile, a parallel history 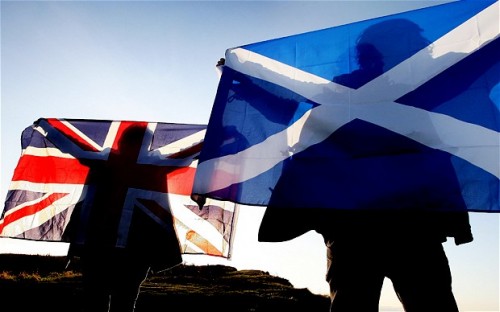 As I read that Scotland may become independent in 11 days, I realize that the English and the Castilians kingdoms have had a similar historical fate. Both first conquered, annexed or joined together nearby kingdoms and territories (via treaties/marriages) and became what is now Spain and UK. After that was accomplished, both then went overseas to conquer a remarkable chunk of the world. As a result English and Castilian Spanish became the two largest Western languages. So these two very small nations, the English and the Castilians had at one point incredible empires with what today would be half a billion people (Castilians) and over a billion people (England). In the late 1700s, and mostly during the 1800s and some remains in the 1900s, these colonial empires fell apart, to the point that what remained of the former glory was the original core Kingdoms of what today is UK and Spain.

But now, over 200 years after key colonies were lost, the early nearby unions, Scotland and Catalonia, may also become independent. Five or more centuries later the mighty kingdoms may go back to their humble origins. Why have the Germans have had such a tendency for reunification, and the British and Spaniards for fragmentation, could be the subject of many books. Probably it has something to do between what is seen as a union of equals vs an imposed culture. Or maybe it is a perception by the Scots and the Catalans of economic benefits to be obtained via independence. But whatever the motivations are, reality is that as of today, half of the Scottish want out and may get out of the UK on September 18th and a similar percentage of Catalans seem to want out. I am not sure how long the Kingdom of Spain will stay together under the framework of the 1978 Constitution. Personally, union or independence in both countries is fine with me, I can see both sides of the arguments. But what is not fine is to keep people in a union they don’t want. Better to vote and see.

In the case of Catalonia, if there is a referendum, I would hope that it goes beyond a yes or no for independence. What is needed is a previous negotiation that would give more clarity to voters on key issues such as, would Catalonia be in the Euro or out, in the EU or out, what part of the Spanish national debt would it take with it, would it vote as a whole for independence or per province (if Spain is divisible, so should be Catalonia) and so on. I am in favor of a referendum in both cases, but with very clear visibility of what yes or no means the day after.