As you probably know, we have now begun shipping the Gramofon. After the amazing support we received when it was introduced on Kickstarter, we are now delivering the first units. Gramofon, as it is today, is a product for residential users who want to become Fon members, a product that improves their home WiFi coverage and of course, allows them to listen to their favorite online music on their existing stereo. 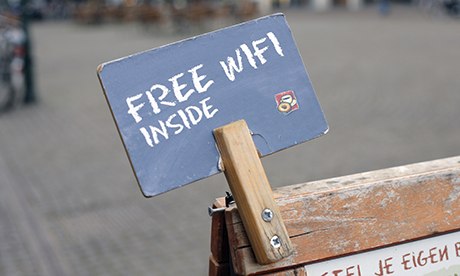 Today the good news are that in parallel we have also been working on a new flavor of Fon WiFi, that we are launching in Beta: WiFi for Business. It is a solution for small and medium businesses, whose owners want to give WiFi to their guests in the best possible way. We want to get rid of places that say “Free WiFi here” and then, when you want to get access, you need to ask for a complicated password written down somewhere on a piece of paper. And that is if you’re lucky! If you’re unlucky, they might not even remember the password. And others may just leave their personal WiFi signal open, putting their security at risk.

With WiFi for Business every store can offer WiFi in a professional and secure way. It’s a fully customizable solution in which the owner of the place can easily design the look and feel of the guests’ WiFi experience and decide how many minutes or hours guests are allowed to surf for free. They can also publish special offers on their WiFi landing page or gain followers advertising their Facebook page. All in the merchant’s hands!

Guests can easily log in with Facebook or with a Fon account, allowing merchants to understand visitor demographics and compare between different locations. Of course this information is shared only with explicit consent from the user.

Starting today in Beta, WiFi for Business is available through the new Fonera for Business. This router can be purchased at our shop at a special launch price. Soon, our telco partners will also distribute the solution to their business subscribers the same way Fon is rolled out to residential subscribers: embedded into their existing WiFi routers.

I expect that the “age of WiFi passwords on a piece of paper” is coming to an end, and I think that our WiFi for Business will be a big part of this trend.

Before Facebook, it was you telling your friends what you are up to, and them doing the same, mostly in writing or via photos. This had a problem that for some “Murphy’s law of Facebook”, those who you cared about the most, posted the least and those who you wanted to learn from the most, were silent. On top of that, Facebook had the “toddler challenge”. Toddlers don’t make friends because they want lots of attention, but can’t give attention. Facebook became a community of attention seekers. Twitter saw this. And what Twitter did to escape this problem is to do away with “befriending” and start an asymmetrical platform from the ground up. A community that by design accepts the reality that talent is unevenly distributed. Twitter killed reciprocity and allowed a few people to lead over many others, those who were truly interested Twitter rewarded with an audience. Facebook then saw a successful formula in Twitter and partly copied it allowing those who generate interest to have followers as well. But that was a secondary feature and Facebook could never give up being a friendship platform, a symmetrical platform of personal news. A platform in which everyone is supposed to generate similar levels of interest. But lately as it became clear that that wasn’t the case, Facebook brought in more Twitter-like elements. Especially media. The latest are “trending articles” for you to follow important media events, and “related articles” a feature which also drives you towards media. These new features were so successful that many media publications now, such as Business Insider, Wired and others, get more traffic from Facebook than from Google. Facebook’s evolution from friends only, to followers and friends, and now to friends, followers and media is working and is making people spend more and more time on Facebook. And in a way it allowed Facebook to sell ads using news organizations, something that not even Google was able to do.

Now the part that I don’t understand is the lack of admiration from the other side or why Twitter never copied what worked best at Facebook. To me what would be crucial is to tinker with the 140 character religion. The 140 characters have forced Twitter’s users to come up with all sorts of ways around it. People attach pictures of long texts, attach links that then Twitter shows or lately Marc Andreessen has come up with a numbered style that many have copied to make their tweets longer. And if there is one place where it really doesn’t make sense to have 140 characters is in DM. If Twitter had made DM unlimited in characters and able to incorporate pictures, videos, and even location early on it would have been a real competitor to now Facebook-owned WhatsApp and possibly to Snapchat as well if it had allowed true privacy. It would have then dominated the public and the private spheres. Twitter had the right concept but they never went full force in the private exchange world, and WhatsApp came out of nowhere and ate their lunch, all $19bn of it.