Who bears the responsibility for the extermination of native American cultures?

Published by MartinVarsavsky.net in Spain with comments

As Columbus Day approaches in the USA and el dia de la Raza o Hispanidad in Spain and Latin America, here are some thoughts on the extermination of Native American cultures. 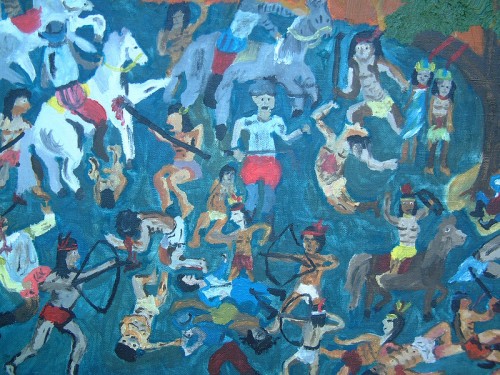 Americans, both South Americans and North Americans mostly blame Europeans for the genocide of the different cultures that inhabited the continent.  They blame Spain for example for the killing of Aztecs, Incas and the wiping out of their culture. And that is partly right. The colonization of America was an enterprise managed by Spanish emigrants (conquistadores) who moved to what is now Mexico, Peru, Ecuador, Venezuela, Central America, to exploit natives, enrich themselves and send precious metals back to Spain.  But the paradox in the accusation of Americans to Europeans nowadays, is that the descendants of those who exterminated native populations are now those who actually live in America not those who live in Europe. Those who are in Spain or the UK now, are actually the descendants of those who stayed in Europe and therefore did not directly commit those horrible crimes. In other words the descendants of the murderers namely those who are today Venezuelans, US citizens or Argentines, are accusing the descendants of those who were not actually part of the genocide because they stayed home, of genocide. To give an example, Daniel Ortega, of Nicaragua, has changed the name of the Columbus Day festivity from “Dia de la Hispanidad” which means day of hispanic heritage day to “Dia de la Resistencia Indígena” or day of the resistance of native Americans. But Daniel Ortega is a descendant of a Spanish family, not of Indians, thus a descendant of conquerors. His family, his ancestors share the blame.  The extermination of Native Americans is nothing to be celebrated, and it is true that Hispanidad is not a fair term as it does not include native cultures. But as far as responsibility for exploitation and extermination of native cultures is concerned, it belongs more to those who are now in America than those who are now in Europe. They are the victors of that conquest.   Moreover, a lot of the extermination of natives went on in countries beyond independence from European powers. The last armed conflicts with native Americans ended as recently as 1924 and was carried out by the US government. The territory that is now the USA, and in the 1500’s was only inhabited by native Americans, now has a native American population at less than 1% of its total population. This is ethnic cleansing on a scale that has probably never occurred anywhere else. And if you think this article refers to conflicts that are long over, think again.  Here’s an article that describe a possible armed conflict between the Brazilian government and native Americans that is going on right now.

How to Have No Wallets and a Safer World

Cash was essentially replaced by plastic decades ago. Now plastic credit cards are becoming obsolete, especially if you carry a smartphone. They are not dead quite yet, but services like Hailo and Uber are just two examples of transactions in which using a credit card is becoming unnecessary. In fact there are a number of efforts underway to eliminate their need and to have you pay for everything using your smartphone. But if credit cards disappear, unfortunately the wallet does not disappear in turn — there is still everything else that we are obliged to carry in our wallets. The truth of the matter is that we should get rid of the wallet itself: it’s uncomfortable and dangerous to carry around, especially considering how common identity theft is nowadays. 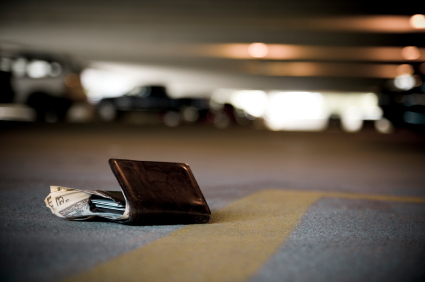 In my wallet for example I have my Spanish national ID, my US and Spanish driver’s license, my medical insurance card, my pilot’s license, my sailing license, my car registration, and a copy of my car insurance. I still need to carry all these things because at various points in my life I may be asked for each one of them. Indeed, in many countries in Europe — and I know this sounds crazy – you can actually go to jail for not having your plastic national ID on you, if asked for it by the police.

Now think of another way of doing this. Think of a website that is a repository of all these IDs, and is government-owned or certified. Why can’t I just visit a police station once, pay a fee (so the government doesn’t lose money on this), show all my documentation, have the government scan and upload everything so that all policemen and pertinent authorities can have access. Then my car insurance company, my health insurance company, the car registration agency can all notify this government repository if I stop paying, or if my insurance policy is not valid anymore.

Estonia has done the most in this direction and its citizens love the system. In 2002 they introduced the most highly-developed national ID card system in the world. The mandatory national card is a legal picture ID and also serves as the digital access card for all of Estonia’s secure e-services:

– National health insurance: Estonia has a nationwide system that integrates data from Estonia’s different healthcare providers to a create a common record for each patient. In an emergency situation, a doctor can use a patient’s ID card to read time-critical information, such as blood type, allergies, recent treatments, ongoing medication or pregnancy status.

– Medical prescriptions: At any pharmacy, all a patient needs to do is present an ID card. The pharmacist then retrieves the patient’s information from the system and fills the prescription.

– Digital signatures: Public administration and businesses can freely use the digital signature system, and have applied it to a variety of web-based services.

– And even voting: In 2005, Estonia became the first country in the world to hold nation-wide elections using this method. Estonians can cast their ballots from any Internet-enabled device and connect anywhere in the world using an ID card reader.

This digitization and aggregation of information only streamlines complicated bureaucratic processes that need not be so, and at the same time makes them safer. Imagine a world in which the police has tablets or smartphones that show nice big pictures of you, in which whatever they currently do secretly with NSA-type agencies they do openly instead. If they find you without an ID they ask, “who are you?”, and once you give your name, they can see your photo and a ton of information about you. It would be so hard for anyone to impersonate you.

I find it paradoxical that while some government agencies spy on you and know all about you, others pretend to know nothing until you show them a piece of plastic that if you lose, somebody else can impersonate you with. We need to evolve from this. We need to evolve into a system in which we have no wallets and a safer world!